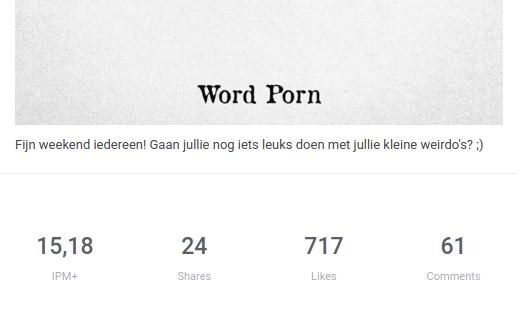 IPM and IPM plus

How to you calculate IPM plus?

You can calculate IPM + in a number of different ways. The idea is the same everywhere, but depending on what you want to compare, the effect does not differ slightly.

IPM + is great for breaking how well a post is doing. Add up the shares, likes and reactions, divide that by the number of page fans and multiply that time 1000 (to get a nice readable number). So the formula is (shares + likes + comments) / page fans.

Do you want to know if your competitor is doing better or worse than you but you have a different number of followers. Then use the same formula for comparing periods. You can compare the outcome of your page with that of your competitor. So ∑ ((shares + likes + comments) /) number of posts / page fans

What does an IPM score mean?

An IPM score tells you how much interaction there is with your message. A message that reaches a lot of people but that nobody does anything with is actually not very successful. With social media it is much more important what people do with your mail, the engagent! An IPM score therefore tells you how successful your message is. An IPM score of 4 is generally seen as a good score. If you score lower than a 4 then it is time to review your social media strategy.

How to you proceed with IPM

Do you have a high IPM score, well, but don't sit back because you can recalculate an IPM score every month (or week, or even year). Use the IPM score to determine which posts, and which types of posts work well with your target group. If you find posts that consistently achieve a high IPM score, then you have the right chord. Experiment further and try to keep your IPM high across the board. That is the start of a successful social media campaign.